Libraries as places for Coaches, Creators and Challengers.

So, yesterday I attended the second day of the Listening Skills workshop, facilitated by Barry Goldberg (I made a point of listening and remembering his name this time!).

It was more an extension of the ideas that were introduced on the first day, but there was one particular take-home message that struck a chord.

Whilst we were role-playing some exercises in talking and active listening, Goldberg observed that a number of us (including me) were following a common pattern. That is, that we were setting up relationships where we saw ourselves as either the persecuter, rescuer or victim.

He attributed this to Karpman's Drama Triangle, which identifies the three roles that we often play, in situations where there is a problem present, and how they relate to one another.
The main problem with this model is that the victim completely without agency, and is reliant on the rescuer to deliver them from the predicament, at the hands of the persecutor. However, without a victim, there can be no persecutor or rescuer. It focuses on the problem, rather than the solution.

Goldberg suggested that we take this model, and turn it around, according to David Emerald's "Empowerment Dynamic": 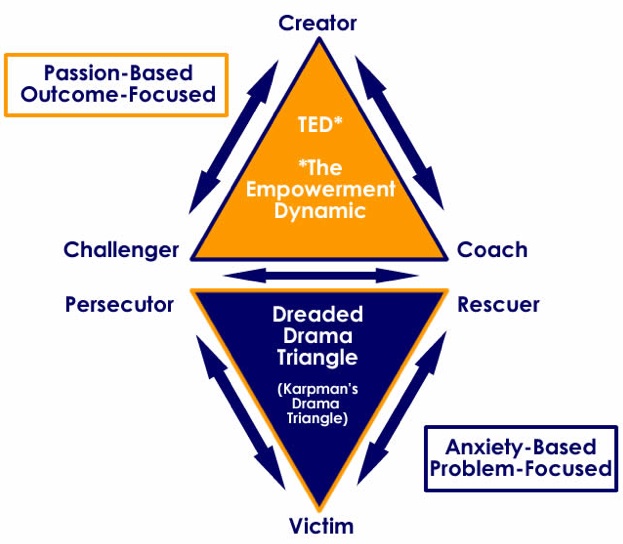 Here, the victim is now empowered to create their own solutions, where the focus is not on being rescued by somebody who has the solutions, but by being coached by somebody who can provide support. Similarly, the role of the perpetrator is now that of the challenger, who forces the creator to clarify their goals.

So, what does this have to do with librarians? As with my previous post, I would point out that traditionally, librarians have been the go-to person to seek out and deliver information, where they were the gatekeepers of knowledge, and the client was reliant of them for the solution, in a time where information was scarce. However, in this information age, there is far less need for librarians being information providers (rescuers) to powerless clients (victims), because they have access to a plethora of online content. Instead, we need to see ourselves as information coaches, who can support and empower our clients with the ability to create their own successful information-seeking strategies as the basis for developing their knowledge, and contend with those who would challenge them to clarify and articulate their outcomes.

Not only does this help empower those who have information needs, but it also manages an awareness of the roles that librarians still need to play in the community, where their perceived need would be otherwise redundant.
Posted by lib_idol at 17:42