Recently, on the 13th of October, the winners of the Inky Awards were announced. I've been a fan of this initiative of the State Library of Victoria for many years, since I was a judge back in 2008. These awards recognise the best YA fiction from the previous year, in two categories: the Gold (Australian) and the Silver (International). Every year, I try to read as many of the long/shortlisted books, and then tune in to see what the outcome is. And whilst it's not always my first pick, it's often in my top 2 or 3 in each category.

So, when the awards were announced this year, I have to confess that was disappointed. Whilst most of the shortlisted novels were deserving works, the winners were far from my favourite of the bunch.

This shouldn't be such a big deal, but one thing that makes this programme unique is that the outcomes are decided by teenagers - four out of the six judges who decide the shortlist are teenagers, and the final verdict is decided through a vote by teenagers. Not librarians, or teachers, or publishers - as is the case with most YA literature awards - but teenage readers.

As a librarian and a YA literature specialist, I stake my professional reputation on maintaining an awareness of the industry, and understanding the needs of teenage readers.

And yet, so often, we librarians and teachers take up the role of definitive authority on what teenagers should read. When parents come to us with advise for what to give their child to read, we use our knowledge based on the books that we've read - or on reviews written by other adult readers.

And though I wasn't there, many of the moments from the awards ceremony were tweeted - this one says it all: 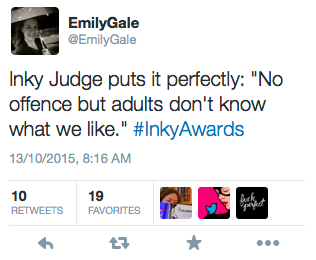 Just because we're the adult experts in the field, doesn't mean we should always assume that we know best. We need to spend more time actively engaging with our clients, and listen to them - even if it means having to accept truths that we don't agree with. Because it's not about us.

Of course, there is also an apt parallel to working in development. If we want to help people, we need to do things on their terms, not ours. Just because we're from a developed country, doesn't mean that we know best. We need to let go of this egocentric attitude, and listen.
Posted by lib_idol at 19:59