So, Thursday morning, and it was time for IFLAcamp - the annual two-day satellite event organised by the IFLA New Professionals Special Interest Group. The first day traditionally consisted of an unconference and workshop, which this year was hosted by the Raja Tun Uda Library, which is a public library in Selangor, approximately 30km out of Kuala Lumpur. Fortunately, the host library also generously provided bus transport to and from KL. And what a library it was - as you can see below!

Once we arrived, we were welcomed with a number of speeches, including a video welcome from IFLA President Gloria Perez-Salmeron, and the director of the Raja Tun Uda Library, and then it was time to get started. Being an unconference, we invited the group of sixty or so librarians to write down suggested topics on butcher's paper, and whilst they were tentative at first, after about 15 minutes, we couldn't stop the ideas flowing!


Which was an interesting conundrum, because the next step was to collate all of the topics onto an online poll, and then get everybody to vote for them, and we had close to seventy topics, which some poor loser would need to put together online. That person was me.

Fortunately, we were able to buy a little time. Firstly, we picked some of the our favourite topics, and divided the room into four groups to discuss a topic each, and then present their discussion to the group. Then it was time for lunch, after which our fearless leader Antoine led a workshop of sketch noting. By this time, I'd found a working wireless connection (mental note: any time you rely on wifi, it's almost guaranteed to let you down!) and copied sixty topics into an online poll. By the time, Antoine's workshop was finished, everything was up, and everybody was ready to vote!

Honestly, with an international group of librarians that were dominated by local Malaysian new librarians, I wasn't quite sure what to expect from the range of topics suggested, but as it turned out, there were plenty of topics that I'm pretty sure most librarians can relate to, wherever they go: 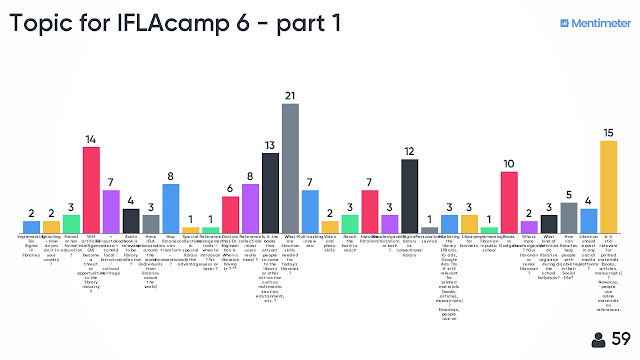 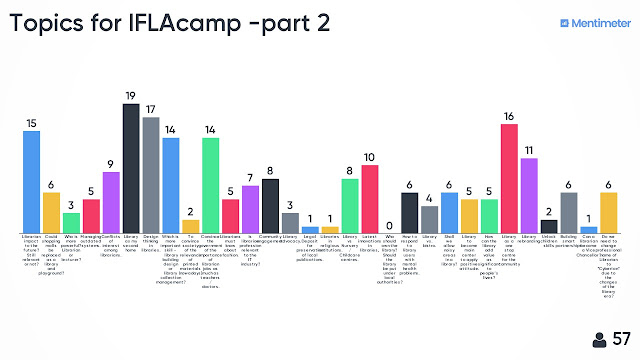 Combined with the inspiration from our sketch noting workshop, there was some super-creative output from some of the groups too: 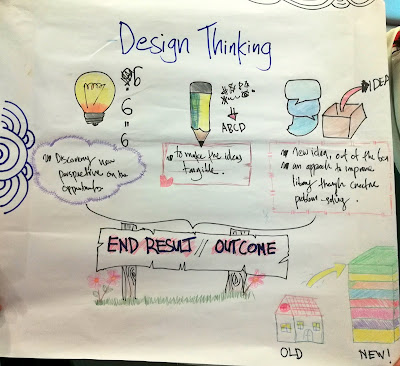 And then it was time to get back on the bus to go home - but not without first getting a "light afternoon tea" which was basically second lunch, as well as a quick "ride" in their 6D Cinema. I don't recommend it in that order!

I can't even remember what I did that night - probably just went back to my hostel and slept in preparation of Day 2 of IFLAcamp! Last year, we all hired bicycles and went on a bicycle library tour of Wroclaw. However, Kuala Lumpur's climate and traffic is not as conducive to casual cycling around town.


So, instead, I devised a plan to navigate the public transport system and take in a couple of cultural sites. Meeting a smaller group of fifteen international librarians at the KL Convention Centre, we boldly went forth and successfully navigated the free goKL buses to the other side of town, where we visited the Museum of Islamic Art - one of my favourite museums of Kuala Lumpur - with an amazing display of architectural design, textiles, jewellery, and, of course, manuscripts and calligraphy.

After an hour or so there, we ventured across to the old Kuala Lumpur station where we found some lunch before catching the train across to the Batu Caves. The 30-minute journey was the perfect opportunity for our more intimate group to introduce ourselves and talk a little bit about what we do as librarians.

And then, we arrived! Due to a less-than-convenient schedule, we had one hour to get out of the train station, find our way up the many stairs to the caves, and return in time for the train to take us back. But we did it, with enough time for a group photo! 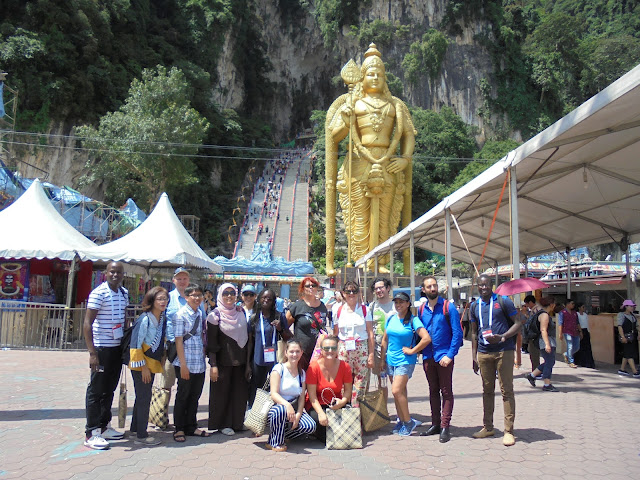 By 5pm, I had returned to my hostel, with enough time to change into my nice clothes, for a reception at the Australian High Commission, where I met up with my fellow Australian delegates, and we even invited our New Zealander compatriots along, who proceeded to ask us what the deal was with our rotating Prime Ministers...

And that, my friends, is how I first came to discover that Scott Morrison was now Prime Minister of Australia.

Next up: The actual conference.
Posted by lib_idol at 13:27