I could show you my favourite obsession.

I have always loved a good puzzle. Jigsaws, wordsearches, crosswords - particularly cryptics - and high school maths, which totally counts. There's something satisfying about trying to crack a code, or just working through a process of elimination, to gain a solution to a problem that's seemingly impossible.

In a previous workplace, we used to have jigsaw puzzles in the tearoom, which in theory is an excellent way to momentarily clear one's mind between workplace tasks. Our outgoing team leader, as a farewell gift, gave us a 1000-piece puzzle of the Magna Carta. It was ridiculously difficult - and whilst it was probably envisaged as a team exercise, it became more of a spectator sport to see how long it would take Andrew to persevere until it was completed. And I did complete it after several months, and many flex hours taken over long lunchtimes, and the occasional afternoon after clocking off. 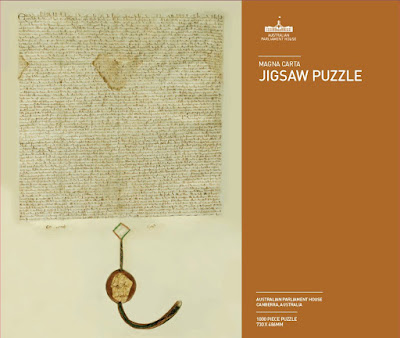 But that was nothing, compared to a far greater puzzle - one that has taken up many years of my life, and had an impact on friendships, mental health and my personal finances....  yes, I'm referring to the puzzle that is career planning in the library sector.

I was one of the lucky ones. I got my foot in the sector as a library casual worker when I was a student. That led to a full-time job as a library officer - which was when the obsession started. The first two steps were relatively straightforward: (a) get relevant experience, and (b) get a qualification. My strategy: do whatever it takes to make sure I have an entry level professional role by the time I graduate - preferably sooner. In my case, 'Whatever it takes' meant moving to Darwin, and within two years I was managing a small public library branch.

But that wasn't enough for my obsession. Getting to this point in regional Australia was one thing, but making it in the library sector in a capital city was another, and that was my next goal. I thought it would be easy. It wasn't. Turns out, in the days before Zoom, it's hard to be competitive in a phone interview from the other side of the continent, and it's even harder to be competitive when you're fresh off a four-hour red eye flight. Every rejection felt like failure, and I would rerun the interviews through my head, checking that I'd done all the right things - worn a suit and tie, spouted prepared responses to questions anticipated around the selection criteria, shook hands (in pre-COVID times!), and followed up with enthusiastic emails reiterating my interest in the job.

I felt trapped - particularly by one of the big rules of career planning: 'Don't quit your job until you have something else lined up.' And then, somebody gave me contradicting advice: 'Why don't you just move back to Melbourne, and see what happens?' Against all my instincts, I decided to embrace the insecurity, and quit what really was a dream job at the time, and moved back to Melbourne. Within two weeks, I had a new job, developing new skills in the library sector.

It wasn't the last time that my obsession reared its ugly head. It happened when I would submit application after application for overseas volunteer assignments. It happened for years of applying for the APS - really, when your guide to job applications is entitled 'Cracking the code', you do have to wonder! Living in Canberra, I remember once sitting in a cafe, and overhearing a couple of fledgling public servants engaged in looping conversations about their plans to move up and make it to EL1 by the time they turn 35. I also saw it in my colleagues at the UN when I was a volunteer at the UN Mission in Kosovo. Their obsession with their career planning strategies was next level. It was horribly unhealthy, and overwhelmed their hopes and dreams for their future.

When I left my last job - and with it, an ongoing place with a coveted library employer - one of my colleagues was shocked, and told me that I was taking a huge risk. 27-year-old me would probably agree. But if there's one thing that I've learned, it's that some puzzles are far too complicated to crack, and that obsession with the long game is just not worth being thwarted by human randomness getting in the way. At at its heart, career planning is about trying to control the uncontrollable. At its worst, it feels like an impossible thought spiral that will never end. At its best, it's an addiction that I know that I shouldn't feed.

These days, I sympathise for those who are entering the sector - it's certainly no easier now than it was then (despite the repeated promises of retiring baby boomers!), and the rules are constantly changing. Recently, my eye caught a new series of articles from ABC Everyday, entitled 'Ready for a career glow up?' Apparently, career plans are becoming a thing of the past, so now I definitely feel a bit silly, right? (To be fair, the list of 5 tips at the end of the article sound suspiciously like career planning...)

Of course, I do feel privileged to be in a position where I no longer feel like I need to break into the sector, nor am I feeling like I'm getting close to obsolescence. I'm somewhere in the middle. You could perhaps call it 'career inertia' - and there's definitely something comforting about it. Rather than obsessing over regaining control, for the first time in fifteen years I'm really content to embrace the insecurity, and go with the opportunities that come my way.