Day three at work, and it was already Friday. Had I thought about what I was going to do on the weekend? Of course not! I had barely settled into my apartment, and despite my best efforts to adjust my sleeping patterns, my body was still off by something between 4 and 8 hours.

Fortunately, being the new guy at work, one of my colleagues invited me to join him and a couple of others on a day trip to Peja / Peć to visit a monastery and then go to a waterfall. I most graciously accepted.

Now, I'd only been in Pristina for three days, but after spending many months living in the big smoke of Hanoi, travelling to the neon jungle of Seoul, and then hipster central in Melbourne, it was quite refreshing to be sitting in a car for a couple of hours, staring out at rolling green hills, framed with jagged snow-capped mountains. As an Australian, unfamiliar with this landscape, I don't I'll ever bore of it.

Anyway, we passed through the city of Peja / Peć and to the UNESCO World Heritage site of the Monastery of the Patriarchate of Peć. This site was the seat of the Serbian Orthodox Church from the 14th century, though it sustained substantial damage during the Ottoman rule. As an important Serbian cultural heritage site located within Kosovo, and given the ethnic tensions that still remain since the Kosovo War, measures have been made to keep the site secure with guarded checkpoints at the entrance, requiring our ID to enter the site.

But stepping through the gates, into the walled grounds, it was like stepping into another world... 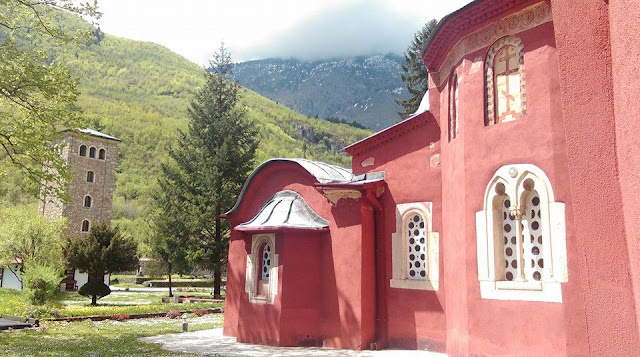 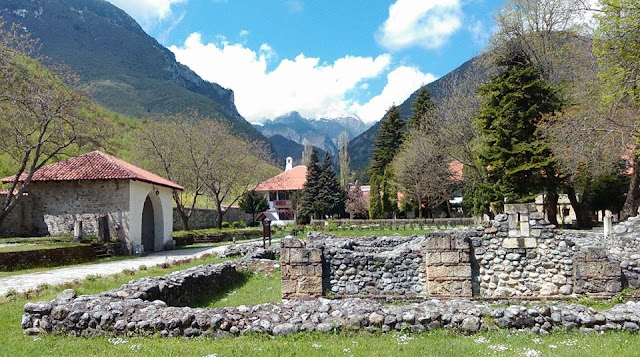 The interior of church itself was beautiful as well, and there's nothing like 600-year-old medieval frescos to transport oneself to another time. With the beautiful sunny spring weather, with a cool fresh breeze coming off the mountains, we didn't want to leave.

And then it was lunchtime.

After lunch, we headed up toward the mountains and visited a waterfall. I took some photos, but next to the above photo, it looks kinda dull. However, Peć is also the gateway to the Rugova mountains, part of the Albanian Alps, and I made a mental note that I definitely needed to return for some bushwalking in the future.

So, less than a week in Kosovo, and I already had a glimpse of what the region does best (other than coffee) - medieval monasteries and majestic mountains!
Posted by lib_idol at 21:15