The National Library of Kosovo

One of the most intriguing of buildings in the city of Pristina is that of the National Library of Kosovo. Built in 1982, and designed by Croatian architect Andrija Mutnjaković, it is often found on lists of the ugliest buildings in the world. Many people I've met here have never gone inside. 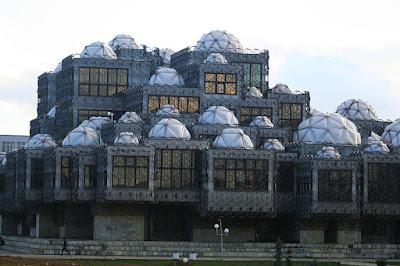 Actually, I quite like it. On the outside, there are the white domes, which are reminiscent of the ottoman baths in Prizren, or the domes of the various religious sites around kosovo, and although the building was completed before the rise of Milosevic and the Kosovo War, the stark cement-wrapped-in-metal-bars exterior seems fitting, given the political history of the area. But that's just my personal impression - other people see other things in this building, and that's the beauty of good art and architecture. It evokes a strong response in its beholder.

And the interior is just as striking, with patterned marble floors, large reading rooms, and an ornate wooden amphitheatre. And the semi-opaque domes effectively work as sky-lights, with natural lighting through the building. I had the opportunity to meet with one of the librarians, who was able to connect with through a former colleague and the International Librarians Network, and she showed me around the library.

As we have seen in other conflict situations, libraries such as those in Baghdad and Kabul suffer greatly at these times, often with the loss of significant collections of cultural heritage significance, and during the Kosovo War there were similar reports of destruction of cultural artifacts.

However, it was wonderful to see that this library has a strong focus on celebrating the diversity of culture found in Kosovo and making it accessible to all. The librarian was proud to say that they hold collections in languages that serve all the communities in Kosovo, and their role was to promote the culture of the community, rather than political agendas. And ethnic identity aside, they also have a collection for the blind, and I was able to meet some of the staff there who were working with equipment that transcribed print text into braille. Such underlying principles of impartiality and accessibility are so important with libraries, and it is great to see them underpinning the services provided here.

Other collections in the building included the NATO collection, the music collection (which included musical instruments, sheet music, and recordings), and various donated collections of local cultural significance.

Unfortunately, I only had a small amount of time to view the library before heading to work, but I returned later that evening, and visited the "American Corner" - a reading lounge set up by the US Embassy, which runs programs to support English Language Learning, as well as collections of fiction by American authors. I donated a couple of my books that I had recently finished, and will certainly return to see if I can help in any way in the future, whether it be running programs or supporting collection development.
Posted by lib_idol at 10:07