A year ago, I was living in Hanoi, not far from the Temple of Literature. Around the Lunar New Year, people visit this almost-millennium-old site, to have their wishes painted in the temple by calligraphy artists in traditional characters. These characters might symbolise love, luck, health, wealth, or even excellent results for final exams. 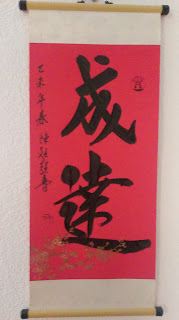 What did I wish for? Success. Whether it was out of entitled arrogance, frustration, desperation or just because that's what we're conditioned to strive for, this was my wish.

A year has since passed, and as we welcome in the Year of the Monkey, I look back on the last year, with my wish hanging on the wall, and I wonder... what brings success? Is it purely hard work? Is it the right attitude? A willingness to say yes to opportunities? Resilience to stick it out and do "the hard yards"? Is it the wisdom to work smarter, not harder? Or does it come to pure luck?

I believe that luck plays a huge part in success. Many people are successful due to factors beyond their control - being born in a prosperous country, to a supportive family, with a strong education, affording certain privileges, and so on. And there are social influences - the people who we meet and connect with through our lives - who either support or discourage us on our paths.

Over the past few months, I've been mildly obsessed with Manuel Lin-Miranda's work of lyrical genius, Hamilton - a contemporary musical retelling of one of the US's lesser-known founding fathers. The two central characters, Alexander Hamilton and Aaron Burr, are both ambitious for success and greatness. But whilst Hamilton is cavalier, hot-headed, and exhibits no restraint, determined not to blow his shot, Burr is sensible, pragmatic and willing to wait for it.


Ultimately, Hamilton comes to an early demise, whilst Burr lives a long life but is largely forgotten - except as the villain of this history.

It's a simple dichotomy, but it's one that I've always felt torn between - whether to take a chance, and leap forward at every opportunity, despite the risk, or to stay put, and hope to have my loyalty rewarded by having been around the longest, sticking it out through thick and thin. Either approach has its merits and risks. Sometimes you happen to be at the right place at the right time, and sometimes your hard work pays off. Usually it's a combination of both.

So, a year later, did I get my wish? I don't feel like I'm failing, so perhaps this past year has set me on the path to success. Or perhaps it's just helped provide me with the wisdom to stop wishing for such things, and just be mindful of what is in front of me, and the choices I have. After all, I am the one thing in life I can control.
Posted by lib_idol at 21:08