In my recent Balkan travels, I was able to spend a couple of days in Sarajevo, the capital of Bosnia and Herzegovina. This is a beautiful city, and when I arrived, it was surrounded by snow-covered hills, and characterised by a blend of Austro-Hungarian, Ottoman and Yugoslav architecture. Walking around the city, it is still very conscious of its tragic history - to some small extent, with the assassination of Franz Ferdinand and his wife in 1914, but more prominently with the Siege of Sarajevo during the Bosnian war from 1992 to 1995.

One of the most significant buildings in Sarajevo is the Vijećnica (City Hall), built between 1892 and 1894 during the Austro-Hungarian occupation of Bosnia and Herzegovina, and opened in 1896. 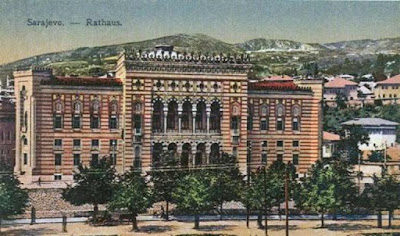 In 1949, it became the National and University Library of Bosnia and Herzegovina, eventually holding over 1.5 million volumes, with over 700 rare books and manuscripts spanning over five centuries of Bosnian culture.

On 25 August 1992, firebombing of the besieged city resulted in substantial destruction of the library and its collections, as it burned for three days in a seemingly targeted attack, as adjacent buildings remained undamaged. 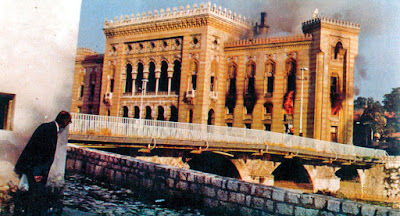 To me, this is reminiscent of when I first heard of the burning and looting of the Iraq National Library and Archives, and the willful destruction of such priceless cultural heritage collections is deplorable. Report tell of of librarians and volunteers braving sniper fire to form a human chain, rescuing books, whilst under constant sniper fire. Aida Buturovi, one of the National Library's librarians, was killed by a sniper in the process. 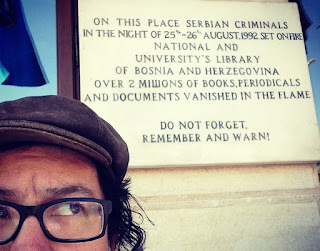 Almost 15 years later, with the support from the international community, the building has been rebuilt and refurbished, and is now a national monument. For a small entrance fee, I was able to go inside and have a look around. At present, the space is mostly empty, as the refurbishment has only recently been completed. There was an photographic exhibition showing the state of the building after the bombing, and the work in restoring the building is remarkable.

I look forward to one day revisiting the Vijećnica again, when it returns to its former glory as a functioning city hall and library.