It was a question that Joey Chung recalled during their presentation at the New Librarians' Symposium in Adelaide, when observing that they were often one of only a few Asian librarians at libraries conference events... where, at one such event, Joey's colleague asked:

Joey, do you think that it is a bit funny that you're the only Asian in here?

Joey's response: Ah yeah, so what? I'm so used to it by now.

You don't need to have prepared a workforce diversity trend report to be aware that the Australian library and information sector has a diversity issue when it comes to people of colour and, unfortunately, this is seemingly even more the case when it comes to delegates that are sent to professional conferences.

However, in a strange twist of fate, I was fortunate enough to be sent as a delegate to attend the biennial conference of the Federation of Ethnic Communities' Councils of Australia (FECCA), held in Hobart last week.
For me, this was a unique conference event, for two reasons:

1. Other than my colleague, there were no other delegates (to my knowledge) from the library / cultural sector; and

2. The overwhelming majority of delegates were people of colour.

And I have to say, it was a breath of fresh air - and that's not just the Tasmanian climate!

There were a number of recurring themes - things that we really should be talking about in libraries - and yes, some of us do, but they are usually far from the top of the priority list:

The opening night reception began with a welcome to country, and the official launch of FECCA's Reconciliation Action Plan. The next morning, one of the keynote speakers was a Palawa Elder, and over the two days, there were quite a number of presentations of case studies where multicultural communities were actively engaging with Indigenous Elders to deliver intercultural exchanges - particularly in facilitating resettlement programs for refugees and asylum seekers. The underlying message here was that we need to stop looking at immigration through a colonialist perspective, and connect better with First Nations values when living in somebody else's land. And when we think about multiculturalism and inclusion of minorities, we must remember that our First Nations people are minorities in their own country.

Lobbying and advocacy. As keynote speaker Hana Assafiri began her presentation - we live in a polarised world. We need to be vigilant against discrimination. We need to understand that bigotry is hate speech and not free speech. We need to be honest about what is happening, and be truth-tellers.

Shen Narayanasamy from Colour Code talked about the moment of realising that 24% of Australian residents were from non-European backgrounds - twice that of the black American population. Furthermore, in 49 seats across Australian, 1 in 5 residents are from non-English speaking backgrounds, and despite common perceptions, many migrants, multicultural and First Nations people in Australia are swinging voters. That's a huge source of political power. And so, people of colour in Australia need to stop begging for acceptance, and instead mobilise and work together.

There are so many important often-unheard voices in Australia that need to be heard, and their messages brought to the forefront of our cultural institutions.

Defining and measuring multiculturalism. Australia does a good job of collecting data on first generation migrants, but for subsequent generations - not so much. Official data only looks at country of birth and/or language spoken at home, so if you're Australian-born and speak English, you don't count as being from culturally and linguistically diverse (CALD) background. This is a set of criteria and definition which came out of a context of exclusion from the White Australia policy. It leads to misleading statistical base data - where the population diversity statistics are out by approximately 1.4 million people - and there is no right for people to self-identify as being from a culturally diverse background.

This, of course, needs to also be considered by libraries (and *cough* library associations *cough*) when considering the statistics on diversity, and using them as the basis for the services that they provide to their communities. 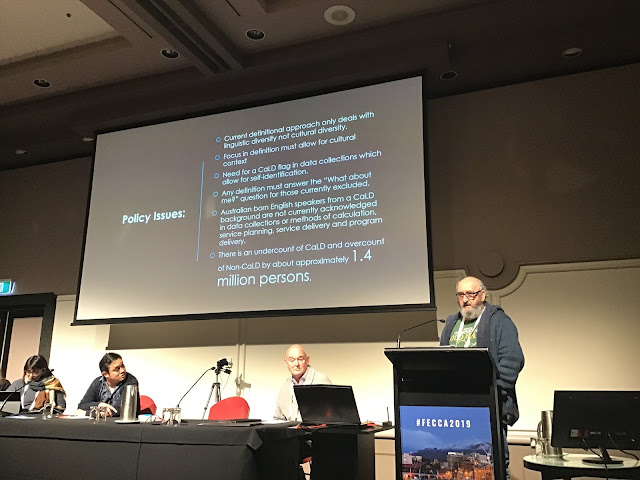 Cultural competency in the workplace. I learnt of a number of initiatives in this area - the Bureau of Meteorology have a Multicultural Access and Equity Action Plan, which outlines their actions for engaging with culturally and linguistically diverse communities. The Department of Human Services have, over the past three years, rolled out a multicultural awareness program to a total of over 22,000 staff, and are collaborating with staff who deliver their Indigenous cultural competency training to provide further anti-discrimination training. HealthWest in Melbourne have gone further, and developed Standard for Workforce Mutuality - the idea that the diversity of the workforce should represent the diversity of their client base. Furthermore, this is an intersectional measurement of diversity, assessing cultural identity along with gender, sexuality, disability, and so on.

Communicating with multicultural populations. Non English-speaking people in Australia need information too - perhaps moreso than anybody else - if we want to be facilitators of social cohesion in our community. We saw a number of presentations showcasing multilingual services - particularly online communication. One such example, ASIC, highlighted the importance of this, as one in three small businesses in Australia are run by migrants - and in most cases, it's their first business. So, it's important that they have access to clear guidance for managing a business well - and legally!

Again, for cultural institutions, we can no longer get away with being monolingual in our communications, especially if we want to engage with multicultural communities and include them in our cultural collections.

So, after spending two days exploring these topics with a bunch of (mostly) non-white non-librarians, I wonder: how hard would it be to have a library conference that was dominated by these kinds of themes? Is that too much to ask?

As an aside, the headline speaker at the Thursday night dinner was Australian comedian Nazeem Hussain - and at one point, he posed the question:

How awesome is it to be at an event in Australia where white people are the minority?

Obviously, a rhetorical question.
Posted by lib_idol at 14:14