I'm back on the road again!

Today's travels have brought me to the city of Birmingham. Now, to be honest, I hadn't given this place much thought until a couple of years ago, with BBC's most excellent Peaky Blinders - a visceral gangster serial set in 1919, where the likes of Cillian Murphy, Sam Neill, Tom Hardy and Noah Taylor do a lot of nasty gangstery things, in very three-piece suits, to a gritty Nick Cave soundtrack. And, of course, the industrial landscape of Birmingham makes for the perfect setting.

That said, whilst I'm staying in quite an industrial area, the hostel is actually a renovated warehouse, in a region that reminds me of Collingwood - somewhat gentrified with many apartments, bars and cafes, often overlooking the canals.

Which brings me to my discovery of the day - Birmingham's canals! Once upon a time, back in the 18th century, a system of canals was established for transporting goods across the country, and Birmingham was at the centre of network. These canals still operate - with about 100 miles of canals still navigable, with many long, narrow canal boats chugging along though the city. One thing I find fascinating about this is the system for travelling uphill on these channels. Through a system of gates, the channels are separated in a terrace-like arrangement of levels. If a boat wants to go *up* a level, one of the gates is opened, and the boat enters the section. 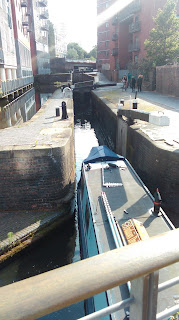 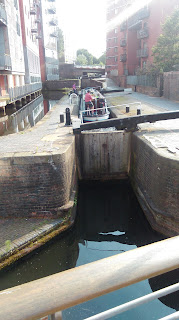 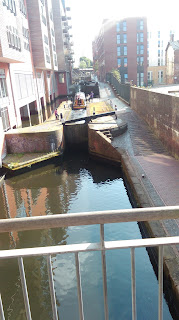 That gate is closed, and the other gate is opened, filling the section with water. As the water fills, the boat rises, until it has reached the next level, and continue on its merry way. Ingenious, no? Ah, the wonders of not-so-modern technology...
Posted by lib_idol at 12:24