And then, on Monday, I arrived in Hay-on-Wye - a small Welsh town on the border with England near Hereford. With a medieval castle ruin on its hill, and many bookstores, this town's population increases exponentially every May / June with the Hay Festival - one of the UK's most prestigious literary and arts festivals. 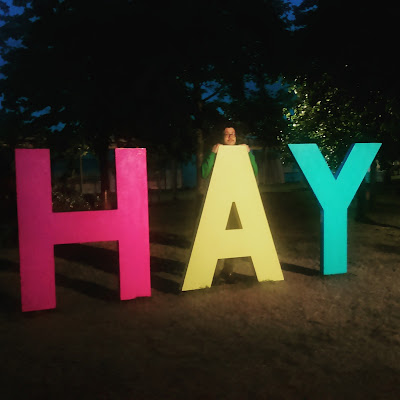 A paddock on the town's outskirts is transformed into a village of marquees where a diverse range of author talks, political debates, cultural discussions and evening performances play to thousands of visitors.

Just over the last few days, I've been able to fuel my YA interests, with UK YA royalty such as Melvin Burgess, Malorie Blackman, and Patrick Ness, as well as an assortment of up and comers.

It's been interesting being here - I've already learnt a lot of new names to look out for, and have come to appreciate how much the Australian and US YA scene has dominated my own bubble... I'm ashamed to admit that, before this week, I would have struggled to name 10 recent UK YA novels. This is something that I must try to remedy... :)
Posted by lib_idol at 08:28