Driving on the wrong side of the road...

So, during my interview for this job, the subject of driving came up - firstly, and seemingly most importantly, if I could drive a manual car, which I confidently said, "Yes". Because it was true.

The next question: "Hmm... you're from Australia? You'd be used to driving on the left side of the road, right? How are you with the right side, considering that the traffic in Kosovo can also be a little unpredictable." I replied that I'd was used to the right side of the road here in Hanoi, and that I doubted that the traffic would be any crazier than it was here. Also true.

That said, I may have neglected to mention that I was used to driving a bike on the right side of the road, and that I might have some trouble driving under such conditions in, say, a large Toyota 4WD.

Flash-forward to Day Two on the job, and I've been booked in for my driving exam - and I'm presented with a large Toyota 4WD. Possibly the largest vehicle that I have driven, like, ever. And my first task is to reverse park in between two tiny traffic cones (which promptly disappeared once I was within a metre of the space). I had three goes to get it right. Somehow I succeeded on my second go, which meant that I was clear to proceed to stage two: the streets.

So, I had been mentally preparing myself for this moment for 24 hours, and there were a number of rules going through my head.

With all this in excellent espresso-fueled mind, I was ready to hit the fury road!

However, my course wasn't so much the Fury Road as it was a series of confusing slow-paced obstacles, so my driving probably came across more like this: 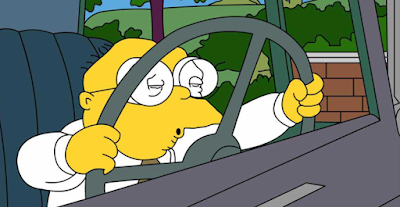 On the plus side, I managed to avoid stalling the car, or opening the car door when I meant to change gears.

Unfortunately, there were a few unfortunate moments:

1. Pedestrian crossings. Firstly, we're actually meant to stop for these - as we are in Australia, but not in Vietnam. At least not that I'm aware of. However, the presence of a pedestrian crossing every 50-100 metres presents the dilemma of either taking twice as long to get to one's destination, or maintaining just the right amount of aggressive velocity to discourage a pedestrian from wanting to step out in front of you, whilst also travelling slow enough to stop if they DO step out onto the crossing.

2. Left-hand turns. Whilst right-hand turns are easy, left-hand turns turned out to be terrifying. Again, my risk-aversion meant that I missed a few windows-of-opportunity to turn. Also, remember to stay on the right.

3. Allowing enough space. As it turns out, drivers in Pristina are accustomed to only allowing an inch more than absolutely necessary when passing one another in a tight spot. I, on the other hand, am not.

4. Three-lane roundabouts. Seriously, what the hell? Apparently there are rules for which lane you're meant to be in, depending on where you plan to exit the roundabout, which results in traffic zooming between lanes whilst within the roundabout. Plus I'm meant to indicate when changing lanes. I think I'd rather a life of hook turns, and navigating the Elizabeth Street Roundabout of Death over this.

So, at the end of my test, my examiner paused for about 20 seconds, which felt like they lasted forever. He didn't explicitly tell me that I'd failed, but suggested that I get a few hours' practice driving on Pristina's streets, and then come back to him, and he seemed confident that this would be no problem once I'd built up some familiarity.

I wholeheartedly agreed with him. Fortunately, I wouldn't need to do the reverse parking test again.

Two weeks (and half a dozen hours of driving) later, I met up with my examiner again, and passed with flying colours with one accidental curb-bump which he chose to overlook.