So, I'm not a huge follower of hashtags. The times that I've used them have been with:
- Conferences (which have definitely been a game changer, in terms of live online discourse)
- Q&A (which I stopped watching a while ago when it became clear that it was just the ABC pandering to the government by giving them a soapbox without actually making them accountable for their answers)
- Writers festivals. Because we can't attend them all!

However, one hashtag that I've kept an eye on for a little while now is #loveozya, mostly found on Twitter and Instagram. YA - for those not in the know - is literary lingo for "Young Adult", usually made in reference to YA fiction. Oz, is short for Australian. And love... well, I don't need to explain everything to you, do I?

So, as an expat, it's been difficult for me to express my OzYA love, since I also read adult fiction and non-Oz YA, and being overseas, it's often difficult for me to get my hands on Australian fiction. Also, now that I look at my bookshelf, of the 26 books that currently sit there, 16 are Australian, so I'm not doing a bad job.

Anyway, here's my instagram shot of my #loveozya haul. (For those of you on instagram, you can find me at @lib_idol.) 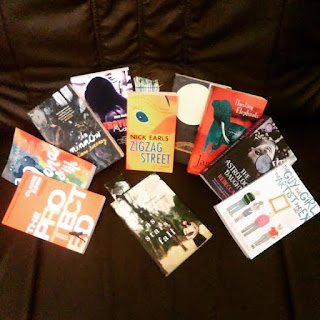 This is a bit of an eclectic mix of books. Most of them are unread books that I randomly pulled out of my boxes of books that I had in storage during the three days that I was back in Melbourne between returning from Vietnam and heading to Kosovo. Some are books that I've been meaning to read for years, but never made it to the top of the pile. The rest are books that I may have impulsively bought online in the last month whilst feeling self-conscious about not keeping up with the YA trends (especially after missing the Reading Matters conference.) And yes, I'm counting Zigzag Street as YA - so sue me. ;)

And then there's As Stars Fall, by Christie Nieman. I should mention that I'm only partially through this book, and would usually never review a book before finishing it, but in this case I feel compelled to write about it now.

I worked in the same library as Christie for a number of months, and crossed paths with her many many times, but never really got to know her, as often can be the case in workplaces. I sometimes saw her at the odd book launch or literary event at the Wheeler Centre. And then, during my brief time recently back in Melbourne, I saw her book on the shelf, and decided to buy it. I'm always willing to give a punt on a new writer - especially if it's YA.

After reading the prologue, I was already obsessed, and wrote to a friend back in Australia that she had to go and find this book and read it, because I already knew that she'd love it.

Every time I open this book, I'm immediately transported. The themes are both classic and original, familiar and surreal, modern but gothic in a similar but altogether different way to Kirsty Eagar's Night Beach. And so very Australian - it makes me homesick to the stomach with each chapter, such is the craft of Nieman's evocative prose style.

I'm not going to say anything of the plot - what immediately drew me into this story is this amazing fella (please watch - it's only a 50 sec video!):

Almost nine years ago, I moved to Darwin. It was definitely a challenging time - moving along to a new city for the first time, living on the other side of the continent in a strange, humid land. As often in the case, I had hideous insomnia when I first arrived, and there were these very strange, haunting noises outside. It was about 1 or 2 in the morning, and it just wouldn't stop. Bleary-eyed but restless, I decided to go for a walk, as one does, hoping that it would help me sleep. The temperature was still in the high 20s, and a hot moisture hung in the air, but in the grassy courtyard I saw a number - maybe 3 or 4 - of these bush stone-curlews wandering around the yard, with their alien-esque bodies and stalk-like legs, echoing their creepy call into the air. I retreated back into my apartment, and the next morning, in my sleep-deprived state, I thought that this episode had maybe been a dream.

It wasn't of course.

On my last night in Darwin, before moving back to Melbourne, I remember lying in bed, hearing the curlew's call echoing into the late night, and wondering when I'll hear it again...

Whilst this is of merely tenable reference to Nieman's novel, my personal memories are constantly in the back of my mind as I read her words, and their underlying themes of feeling lost, alone, and grieving, yet utterly alive and connected to nature.
Posted by lib_idol at 15:55