From Shakespeare's birthplace to his final resting place...

Firstly - you are reading the 100th entry for this blog! Sure, many of them are thanks to my participation in BlogJune, but let's treat this as an auspicious moment, all the same.

So, today's excursion took me to the town of Stratford-upon-Avon, most notable for being the home of William Shakespeare.

I initially had planned to travel through Stratford to Oxford. However, I recently checked my bank balance, and after recovering from the shock, decided that I was not being nearly careful enough about my finances. And so, after doing some number-crunching, i realised it was much more cost efficient to stay in Birmingham for an extra night, take a return train to Stratford, and then a bus to Oxford in the morning. Furthermore, there are no left luggage services at Stratford-upon-Avon station, so I'm glad I was able to keep my luggage in Birmingham, because that would have otherwise been a huge pain!

Anyway, travel logistics aside, Stratford-upon-Avon was a delight to visit. After a 45-minute train journey, my first port of call was Shakespeare's birthplace and family home. Adjacent to this building, they've set up an exhibition space / museum, with all kinds of Shakespeare-y displays. In the garden, there were actors reciting his best-known soliloquys to (sometimes) appreciative audiences. And then there was the house itself, which gives an insight into the lives of those living in Elizabethan times, and perhaps what was most interesting was how over the centuries, the house has become a place of pilgrimage for writers, with a multitude of engraved signatures of visitors on the windows.
Included in the ticket was entry to the Harvard House - not in itself related to Shakespeare, but its owners were contemporaries of Shakespeare - and Hall's Croft, the home of Susanna, William's eldest daughter. Both were in good condition, especially the latter, with its gardens which were perfect for a cup of tea in the sun. Unfortunately, I had arrived several weeks too early, as New Place - Shakepeare's main residence in his later years - was being prepared as a new commemorative space to be unveiled as part of the celebrations of 400 years since his death in 1616.

It seems fitting that he was buried a short distance from where he was born - at Holy Trinity Church. Presumably, he's still there, given the curse that is engraved on the stones "curst be he that moves
my bones. 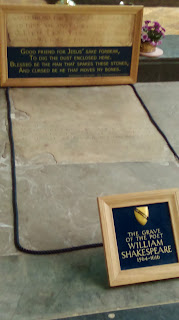 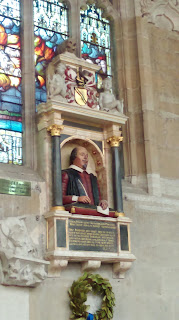 Overlooking his grave is an effigy that was created around that time - one of the earliest representations of William Shakespeare's physical appearance, predating his portait on the cover of the First Folio which was published in 1623.

On leaving the church, I still had much of the afternoon left which was spent walking along the banks of the Avon river, past the majestic Royal Shakespeare Theatre, and the canals headed for Birmingham, noting that it was 23 hours away by narrowboat - substantially longer than the 45 minute train trip. After sitting on the grass, watching the swans and geese pass on the water, and finishing my book, I headed back to Birmingham, ready to pack my bags and head on to Oxford tomorrow...
Posted by lib_idol at 13:00